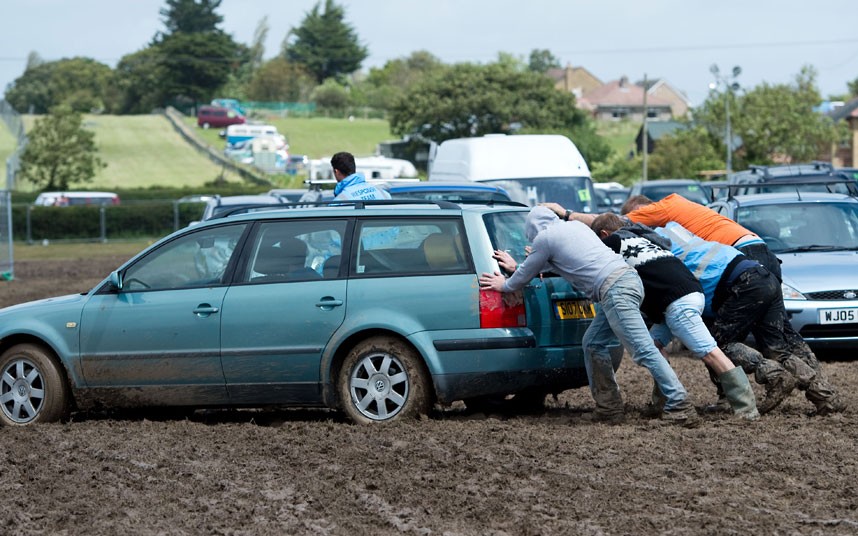 It was a cold rainy December afternoon and I was scrambling to reach the masjid for Friday prayers with my boys. We were a little late and the paved parking lot was full so we had to park in the grassy lot. When we came out of the masjid, it was raining cats and dogs. We ran as fast as we could to our car and jumped in. Got the car started and the heat cranking and put the car in gear. It refused to budge. We tried to reverse. Nothing doing. Changed to lower gears, deactivated traction control and tried again. No luck. The tires were getting no traction. We were officially stuck in the mud on a cold and rainy day.

What to do now? We noticed one guy with an umbrella come towards us and offered to help. My boys got out of the car and the three of them tried to push the car while I tried to reverse but that did not help. Oh boy! What do we do now?

I noticed there were 7 or 8 other cars in the same predicament – stuck in the mud like us. I got out and went to them and suggested that we all get together and get one car out at a time. They agreed and now we were 6 to 8 strong, enough to push with our now frozen hands and get some good done.

We pushed one car out, then the second and third and so on including ours. It took a while but eventually all cars we pushed out and back on pavement.

We all thanked each other and got into our cars. We were soaked to the bone and shivering like crazy. I couldn’t feel my fingers and the boys were in no better condition. We cranked up the heat and waited for the heat to kick in to warm up enough to stop shivering. The car finally warmed up enough for us to regain some of our senses.

I started driving and looked at my boys. They were in miserable shape but they had the satisfied look of a person who knows he did something good. By coming together, we not only got ourselves out of the mud, we helped others too. The Imam’s sermon was very good, but I think the collective deed had a stronger impact.

Next time you get stuck or see someone else stuck, don’t despair. Change your perspective and figure a way out to help. That may be a good teaching opportunity in addition to doing good.